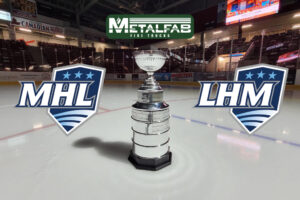 Metalfab Ltd. is pleased to announce we have signed a multi-year agreement with the Maritime Junior Hockey League (MHL) to be the title sponsor of the league’s playoffs and the championship trophy beginning in the current 2022–23 season.

“Metalfab is extremely excited to be able to give back to several communities across the Maritimes through our new partnership with the MHL,” says Metalfab Ltd. Business Development Manager Ryan Stacey. “As both the MHL and Metalfab are community-minded organizations, this partnership is a great fit. It is a great honor for us to be able to watch teams vie for the Metalfab MHL Cup.”

The league’s twelve teams will now compete for the Metalfab MHL Cup, with the Metalfab MHL Cup Playoffs beginning in mid-March. Four teams qualify from each division—the Eastlink North and Eastlink South—and three playoff rounds follow. The championship trophy will be presented to the league champion in late April.

“We are extremely happy to be signing this partnership with Metalfab Ltd.,” says MHL President Troy Dumville. “The MHL is looking to create strong ties with community-minded organizations, and Metalfab fits that description perfectly.”

Metalfab has always believed in not only serving the region with all of its fire apparatus needs but also investing in the community at large. Since its inception, Metalfab puts its customers and partners first and foremost and is always seeking new ways to get involved. Most recently, we announced the latest winner of our Jim Hayter Memorial Scholarship. The scholarship was created in 2017 as a way to give back while recognizing the passionate years of fire service and friendship firefighter Jim Hayter gave to so many.

Metalfab Ltd. is based in Centreville, New Brunswick, and over more than 50 years, owners of Metalfab fire trucks know that each purchase is a 20-year partnership of protection for themselves and their communities. As Metalfab grows to become the first choice in emergency vehicles, its current customer base of over 900 partners will grow significantly.

The Callaghan Cup became the exclusive trophy of the Maritime Junior A Hockey League beginning in the 1991–92 season. It remained as such until the 2005–06 season when the trophy was replaced by the Kent Cup. After eleven seasons, the trophy changed again, this time to the Maritime Hockey League Championship in 2016–17. A new trophy was commissioned and became the Canadian Tire Cup from 2018–19 to 2021–22.