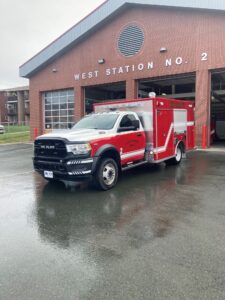 History of the Push-In Ceremony

Early hand-drawn fire engines, ladder wagons, hose carts, and other apparatus of the 17th century had to be pushed back into the station by hand after every call. The horse-drawn steam engines that followed in the 18th century could be backed up. However, having to control the horses made it difficult to align the engine’s steam connections with the station’s steam connections. For this reason, the horses were typically disconnected and the engine was again pushed back into the station by hand.

When the first motorized fire engine was put into service in the early 19th century, firefighters continued to honor the push-in tradition, which grew to mark each new purchase of fire apparatus alongside a wetdown ceremony. Departments would retain the services of renowned artists to adorn the new rig and invite everyone in the community to participate. After every wetdown, fire engines were ceremoniously pushed back into the station in a grand display of homage and fire service unity.

Fire trucks today are far larger than those used in the 17th through 19th centuries. Physically pushing units into the bay is no longer a viable option for some departments, particularly those with a limited number of members. Of course, breaking tradition isn’t a viable option either, so fire departments have gotten creative with their approach to tradition. Some departments have modified their push-in ceremonies by having one member of the crew back the unit into the bay while the rest walk alongside the fire truck in uniform. This simulates the act of pushing in while continuing to commemorate the symbol of dedication and unity that has driven fire departments for hundreds of years.

Before the truck is “pushed in” to the station, children and other members of the community may be invited to explore the new unit. The fire chief typically gives a speech and their blessing. They may also give a verbal tour to demonstrate the new unit’s capabilities. Not only does this connect the community with the important work of the fire service, it sparks interest in serving for the future generation of firefighters. The dedication is concluded with a public radio transmission announcing the new unit is available for service.

Modern push-in ceremonies commonly include complimentary snacks and refreshments and a variety of fun activities. These might include a silent auction, live entertainment, or a raffle. A community wetdown also remains an integral part of most push-in ceremonies.

A community wetdown ceremony is often performed alongside or as part of the push-in ceremony. It is a means of anointing the new unit into two decades of service. In wetdowns of the past, the new fire engine was famously sprayed using the hose from a visiting unit. Because the water pressure of fire trucks today is extremely high, modern departments typically opt to “spray” the unit with fog steam from a handline instead.

Every push-in ceremony is special because new trucks only come into service every few years. When planning your ceremony, take time to develop events and activities that will complement the features of the new unit while engaging the unique facets of your community.

The common pieces to address when planning a push-in ceremony are electing a chairman, devising a schedule, recruiting other first responders like police and paramedics to participate, obtaining the necessary permits, establishing a uniform, assigning positions, constructing safety protocols, marketing through press releases and social media, and distributing invitations. Don’t forget to conduct a walkthrough prior to the big day to make sure everything goes smoothly and as planned.

Metalfab Wants To See You Push!

If you are celebrating the induction of a new custom Metalfab fire truck into your fleet with a push-in ceremony, we want to see it! Even if we can’t be there in person, we would love to see pictures of you pushing the new unit into the station and share them on our social media pages with your permission. Give us a call to let us know you are planning a push-in ceremony and we’ll be happy to give you some ideas for making the most of the big day. Send your push-in pictures to Metalfab’s Business Development Manager, Ryan Stacey, at rastacey@metalfabfiretrucks.com to share with our team and other departments via our Facebook page. Happy pushing!