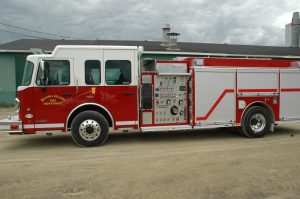 Quadra Island Fire Chief Sharon Clandening has been with the Quadra Island Fire Department for 27 years, moving up the ranks until she became chief in 2008. When she was recruited, there was very little emergency coverage in the Quadra Island community, and the department’s fire chief at the time was specifically seeking women with school-aged children to join. Sharon just happened to be one of those moms, and she became part of a nine-woman recruit class and the first recruit class to go through formal training and certification. Up until that time, it had been an environment of learning as you go. Although she encountered some older male crew members who were unhappy with the new system and the gender of her recruit class, Sharon remembers being welcomed and encouraged by the majority of the department as she paved the way for change.

This month, we’re excited to spotlight Sharon and the Quadra Island Fire Department for their innovative attitude and commitment to serving the tight-knit community that makes up their beautiful island. What an honor to recognize our dedicated first responders coast to coast. If you have the chance to visit Quadra Island, it’s an experience you won’t forget.

Tell me a little about the Quadra Island atmosphere and community.

Quadra Island is only 35 kilometers long. We have a population close to 4,000 people, with the southern portion being the most populated, and we are growing by the year. In addition to this, we have approximately 10,000 tourists show up during the summer months . . . when there is no pandemic, of course. Our island is a short seven-minute ferry ride from neighboring Vancouver Island. It’s mostly rural, with around 10 percent commercial regions and one percent industrial.

What is your favorite memory of working with the Quadra Island Fire Department?

After 27 years, there are too many favorite memories to pick just one. I have been given numerous opportunities that I would never have had the chance to experience if I hadn’t joined the department back in 1994. One of those opportunities happened early on in my firefighting career when the residents of Kemano, a small town in the center of BC, were being moved out and the houses that were left behind needed to be disposed of. The powers that be offered these buildings to the local police, fire, and military divisions to do scenario-based training. In return, we were asked to burn down all of the structures. Quadra Island was one of the many departments at the time to send personnel to participate in the training and to help get rid of the many condemned houses. We burned down 21 structures in a single weekend, which was more experience fighting fire in one weekend than one would normally get in 15 years on the job. What an experience that was!

How many first responders are there on Quadra Island, and what kinds of challenges do you face?

Along with the fire department, we have an RCMP Detachment and an ambulance station to assist with first response. A unique quality about Quadra that makes it challenging to fight fires is the lack of hydrants and the lack of an official building code. We never know what we are going to find when we respond to a structure fire because homeowners are allowed to add on to any structure without adhering to any kind of code.

What’s the size of your department as far as number of members, full-time and volunteer?

Quadra Island Fire Department is a composite department comprising 36 volunteers and two paid positions. Myself as Fire Chief and the Deputy Chief are both paid positions.

How many stations do you respond from?

We have two fire halls eight kilometers apart. One is a satellite hall housing two apparatus that we are in the process of replacing with four new apparatus and space for a workshop, turnout gear room, gym, offices’ and sleeping pods.

What is the greatest challenge you’re currently facing in your department?

The biggest challenge we face in our department is member recruitment and retention.

How many trucks do you have in your fleet?

We currently have six units of apparatus. These include two engines, two tankers, a compressed air foam system truck, and a hose-laying vehicle. We are considering adding a command vehicle to the fleet this year by purchasing a used vehicle from another department.

What’s the main challenge that you face in regard to your trucks at this point?

Like a lot of the smaller departments across the country, our biggest challenge with our fire trucks is trying to make them meet all the demands in today’s fire service. We just can’t afford to have a single truck for each and every specific job.

What was it like working with Metalfab for your custom fire truck?

Our experience with Metalfab has been outstanding. They have made the process of purchasing a truck very easy, and the quality of work is excellent. We have now purchased two units of apparatus from Metalfab, and we hope to be back for number three in a few years time.

Metalfab: Quality You Can Count On

Thank you so much to Sharon Clandening of Quadra Island Fire Department for interviewing with Metalfab’s Business Development Manager, Ryan Stacey. If you’d like to learn more about the Quadra Island department, you can visit their website at www.quadraisland.ca. If your department is looking to purchase a new fire truck with superior service and quality you can count on, our Metalfab team would love to hear from you. Give us a call at 1-800-561-0012 or contact Ryan directly at rastacey@metalfabfiretrucks.com to get started.